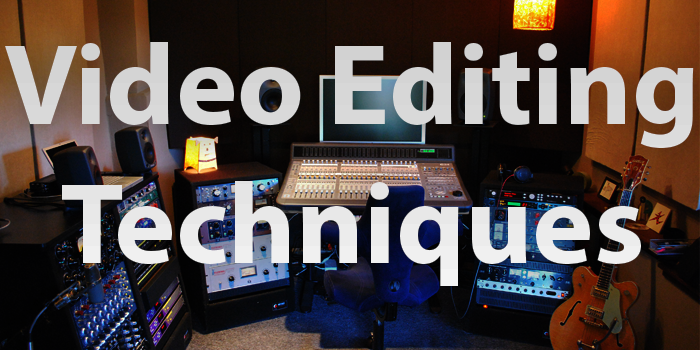 If you want, there is a plethora of video editing books out there, explaining techniques on how to professionally edit video. There are all sorts of rules, J-cuts, L-cuts and much more. In our opinion, these are a waste of time. Why? Because you already know most of them from watching YouTube videos, movies, and commercials. By making a note of paying attention to the composition of videos, you can master them even more, until you have a gut feeling, which will allow you to creatively arrange your videos into something that is enjoyable to watch.

Even if you’ve never edited video before, or are just a beginner, it’s usually easy to tell if a cut between two clips doesn’t look right. Maybe the angle on the subject is too close between the two or it looks jumpy. Rather than memorizing rules, (that are often broken) it’s important to be able to use your gut feeling to determine if it looks good. After you’ve edited for a while, you will develop a knack for how to organize your clips together into something that flows and smoothly directs the viewer through the video without confusing them. To help expedite this process and make your video look more professional, pay attention to the composition of and patterns you notice from commercials and movies.

Most video editors have some sort of inspiration, someone who’s videos they can look up to and get ideas from. Analyze all of the videos and get ideas… How is the music interweave into the video? How long/short are individual clips? What is the order/organization of the video? Questions like this, along with just paying attention to the editing of a piece will allow you to begin to emulate them and create professional looking videos, using proven techniques combined with your own creativity.

Try this one: here is a video that consists of very professional, but creative editing.

THE SUMMIT TRAILER 2 from Nick Ryan on Vimeo.

THE SUMMIT TRAILER 2 from Nick Ryan on Vimeo.

The deadliest day on the worlds most dangerous mountain.

Trailer for the feature documentary ‘The Summit’

In August 2008, twenty-four climbers from several international expeditions converged on High Camp of K2, the last stop before the summit of the most dangerous mountain on earth. Forty-eight hours later, eleven had been killed or had vanished, making it the worst K2 climbing disaster in history.
In a century of assaults on K2, only about 300 people have ever seen the view from the planet’s second highest peak. More than a quarter of those who made it didn’t live long enough to share the glory, or to tell the tale.
At the heart of The Summit lies a mystery about one extraordinary man, Ger McDonnell. By all accounts, he was faced with a heart-breaking dilemma— at the very limit of his mortal resources, he encountered a disastrous scene and a moral dilemma: three climbers tangled up in ropes and running out of time. In the death zone, above 8,000 metres, the body is literally dying with each passing second. Morality is skewed 180 degrees from the rest of life. When a climber falls or wanders off the trail, the unwritten code of the mountain is to leave them for dead. Had Ger McDonnell stuck to the climbers’ code, he might still be alive.
The Summit is about the very nature of modern adventure. Those who survive carry with them a commodity to sell— The Story. This one remains contentious and fiercely debated.
Produced and Directed by Nick Ryan
Written by Mark Monroe
Edited by Ben Stark
Music by Nick Seymour
Director of Photography Robbie Ryan & Stephen O’Reilly
Executive Producer John Battsek, Pat Falvey, Darrell Kavanagh, John McDonnell

Keep editing in the back of your head when watching anything, and you will find your own skills rapidly increasing!

PEOPLE ARE AWESOME: A SHOWCASE OF EXTRAORDINARY ABILITIES (2013)

PEOPLE ARE AWESOME: A SHOWCASE OF EXTRAORDINARY ABILITIES (2013)